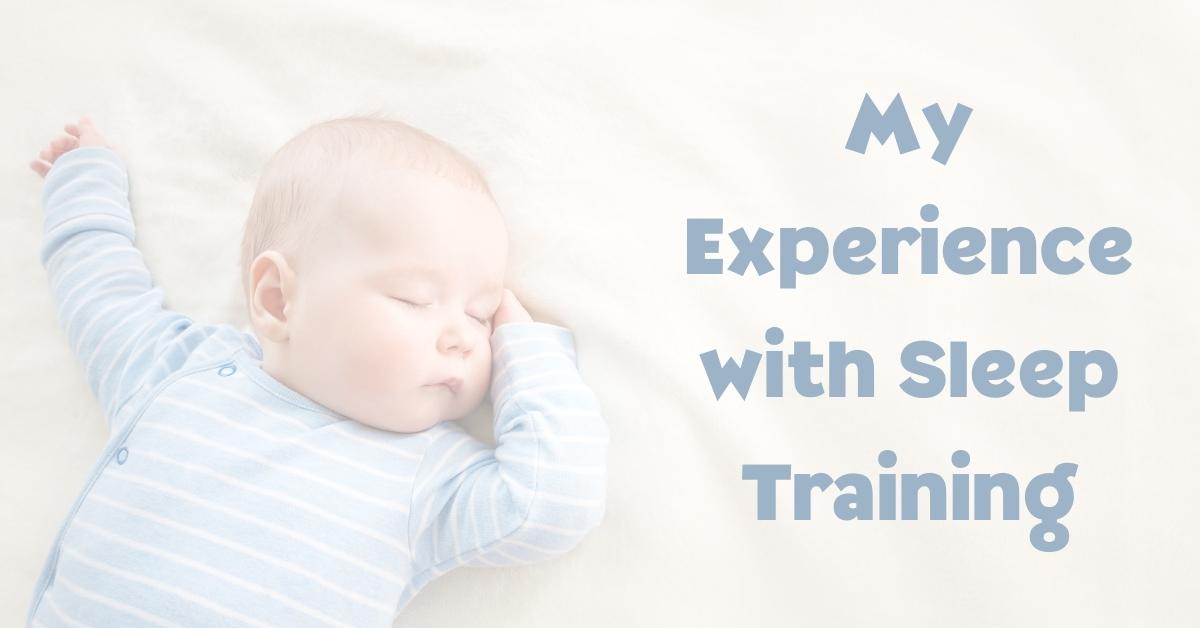 My Experience With Sleep Training

My experience with Sleep Training in the first 18 months.

I had always planned on sleep training when we transitioned our son from the Snoo (bassinet) to his crib around the 6 month mark. However, my husband was having a little bit of a hard time with it, thinking he was hungry and still needed to have a bottle in the middle of the night.

Due to that factor so we let it go a little longer and didn’t start Sleep Training till he was about 10 months old. In hindsight I would have done it a lot sooner. To read my experience with sleep training, keep reading.

*Please note, I am not an expert on baby sleep or sleep training, and do not recommend any particular method over the other. Sleep Training in itself can be very controversial and is a very personal choice. There is no right or wrong way to raise babies and what works for me might not be a good fit for you. This post is purely for informational purposes.

Disclosure: This page contains affiliate links, which means that if you purchase through one of the product links, I’ll receive a small commission at no cost to you. Thank you so much for supporting me! Read more about my disclosure policy.

When we decided to sleep train we chose the Cry It Out Method. We felt that this would be the most appropriate for my son due to age, temperament, and other personal factors. If you are planning on sleep training, I highly recommend that you do your research and decide which is the best method to use for yourself and your baby.

A great book to check out that is all about baby sleep and schedules that you can start in the very beginning is called Babywise.

There are many different Sleep Training methods and the one that we are following is the Cry It Out (CIO) method which goes something like this:

Establish a bedtime routine and put your baby down in the crib sleepy but AWAKE. Note the time baby went to sleep on your Sleep Training Chart.

For the last 10 months we have been giving him a bottle and rocking him to sleep and it has worked great. The one consistent thing my son does is go to bed with no issues by 8pm every night. We kept this going and decided to just focus on the middle of the night wake ups to start. We had to modify his evening schedule a bit, because he previously had bath time around 645 and got ready for bed, then he got to play a bit longer until it was time for his bottle around 730 or so. Now after his bath we go right to his room, put on his PJs and Sleep Sack, give him his bottle, a little bit of rocking but not much and put him in the crib. I must admit he’s mostly asleep when we put him down, but he just goes out so quick with the bottle, that at the moment it’s working so I am not pushing it.

I love the HALO Sleep Sacks. We have used multiple versions of them, they are affordable, you can dry them all the way and they hold up nicely. When we transitioned into the crib from the SNOO we went right into the Original HALO Wearable Blanket Sleep Sack. We have a fleece one for winter time and cotton version for warmer weather.

When my son got older and started walking we transitioned him into the HALO Early Walkers Sleep Sack. He has been in this one since he was 10 months old and he likes it, we like it, its a win-win. We also don’t have to give him a blanket because of it, so we will probably continue this until he transitions out of the crib.

When your baby wakes up start your “pop-ins” schedule. Pop-Ins are 5, 10 and 15 minute increments of time that you “pop-in” to check on your baby and give them some reassurance. This is the hardest part, listening to your baby cry. The schedule looks something like this:

The first night, my son cried for 30 mins total. The second night, which I know was a fluke, he slept for almost 11 hours straight! The third night woke up and cried for 15 mins total, the fourth night cried for 30, the fifth night slept for 11 hours! The sixth, he slept through but woke up before the 10 hour mark which is referred to as the “early riser”. We let him cry it out for about 45 mins hoping he would go back to sleep but didn’t. Night seven was the best yet. Here is a snapshot of our first weeks Sleep Training Chart:

Babies who consistently wake up early, in the 4-6am time frame are known as “early risers”. The goal of sleep training is to get your baby to sleep 11-12 hours a night. If they wake up before the 11 hour mark, you are supposed to repeat your pop-ins schedule until they either go back to sleep or long enough to keep them in the crib till the 11th hour, teaching them that they need to sleep that long and not wake up early.

This is where we struggled and I knew would probably be the hardest part for us as my baby has been an early riser since the very beginning.

Week two was going great until Night 11. My mom was the one giving my son his bottle before bed, like she always does when she comes over, and as soon as he was done threw up the whole bottle. Milk was everywhere! This is the first time that has happened so clearly he was not feeling so great. We had to change his diaper, pjs, the whole thing. He was so tired that we opted not to try another bottle, especially if he was not feeling great and put him to bed and he went right to sleep. We knew this might set us back and that he could wake up hungry in the middle of the night. Sure enough around 530am he woke up hysterical. So we gave him a bottle and he did not want to go back to sleep.

This of course set us back the next two nights and he woke up in the middle of the night expecting a bottle again but we held firm and after some crying he went back to sleep. That was all it took. Ever since then he has slept 10+ hours every night.

He still does not sleep 12 hours like he “supposedly” should, but he consistently gets 10-11 hours a night and an hour and half to two and half hour naps daily. Occasionally a 3 hour nap if he’s really tired. This works for him so no complaints there!

A few weeks past his first birthday, all of a sudden he decided he was NOT going to bed on time anymore. He fought and fought, wiggled his way out of the chair and tried to run for the door. We would end up taking him downstairs and letting him get some more energy out, thinking maybe he just wasn’t tired yet. This happened for about a week, until we decided to go back to the basics of sleep training.

Full Disclosure: because he had always gone to sleep so easily with his bottle, we never really had to enforce the “lay him down awake but sleepy” part. In hindsight that was probably the issue we were having now.

So we changed our tactic and gave him his bottle like usual but then immediately put him in the crib right after he was done, regardless if he was asleep or not. This resulted in some crying, standing up in the crib and all that, but a few short days later, he had learned that when he goes in the crib it’s time to go to sleep and he adjusted rather quickly.

This is one area that we have always struggled with. My son has some extreme FOMO and hates to go take a nap. We have resulted to all kinds of different methods over the last year and a half, but the things that really help are making sure he has a consistent nap schedule and ensuring that he gets plenty of exercise in the morning before the nap. This part is key, if he doesn’t wear himself out, he will stand in the crib and protest for an hour…. 🙁

Right around 18 months my son got his first cold. Yep, we made it that long without him getting sick. Probably one of the only silver linings of COVID is that due to all the quarantining and seeing less people he was not exposed to any colds or viruses. Either that or he has an excellent immune system so let’s go with that option :).

When this happened he also was teething and this sent his sleep schedule into a tailspin. It was a nightmare for about two weeks and his routine went out the window. He ended up going to sleep in our bed at night and then during his middle of the night wake ups, which were all over the board, anywhere from 1030pm, 330am, 5am, etc. he would end up back in our bed or not going to sleep at all which caused a lot of sleepless nights for everyone. Its not as easy to just rock a 18 month old back to sleep when they can get down themselves and run away from you… little stinkers! 🙂

So when he was feeling better, we took the opportunity to not only redo his sleep training but we changed up his going to bed routine as well. It was something we had planned on doing before Baby #2 comes anyway so we took the opportunity to just do it now. Up until he got sick we did bath and PJs, then bedtime bottle and a little bit of rocking and then right to sleep. For the last 8 months, with the exception of the 13 month regression noted above, it has been no problem.

For this new phase, we changed it to: bath, PJs and Sleep Sack, read to him while he drinks his bedtime milk and then right into the crib while he is still awake. You will be SHOCKED to know that once we put him in the crib he was NOT super excited the first night or three… haha. But he quickly adapted and by night 5 he went down without a peep and was asleep within 5 minutes.

The middle of the night wake ups continued for a few nights as well, but each night it was less and less and by night 3 he was sleeping his usual 10-11 hours straight. During this time we let him cry it out and it never went more than 20 minutes or so.

The Hatch: Sound Machine, Night Light and Time to Rise Alert. Grows with your baby and can be used throughout their early years.

Humidifier: For those nights when your baby has a stuffy nose and is not feeling well.

Nanit Pro: Smart Baby Monitor and Wall Mount. Can’t say enough about this product. I tried several baby monitors and was not happy with any of them, so I gave in and got the Nanit!

Thanks for reading My Experience with Sleep Training. It’s been interesting to say the least, but I have definitely learned a lot from this process and will use it all for the second time around.

Best Maternity Clothes For All Trimesters!

The Ultimate Guide To Toddler Toys For Boys

The Ultimate Guide To Baby Toys For Boys

The Ultimate Guide To Toddler Toys For Boys148 Total Shares